Home of
Holz Tal German ShepherdsBreeding Quality You Dream Of

Parade and the International Equestrian Festival

Here is a brief write-up about the IEF and some pictures below. 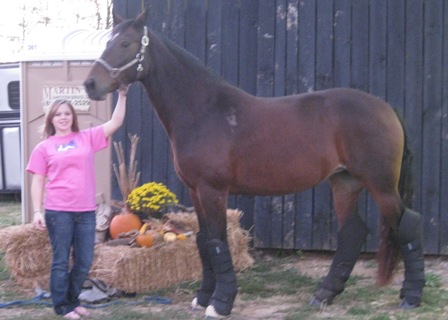 We were stabled in the beautiful rolling hills of Paris, Kentucky for the Celebrating the Spirit of the Horse parade in September.  When we arrived in downtown Lexington, trucks and trailers lined both sides of the street.  You could feel the excitement in the air as everyone unloaded their horses and warmed them up.  Windzor stood perfectly still as I tacked her up, even with the police cars and fire trucks passing her.  I warmed Win up in a small field and she got to talk to a very excited little boy!  We then took our spot in the parade line-up along.

Win held her head high as she marched down the streets and waved to all the children.  The fire truck was not far behind us blaring its sirens as the police motorcycles went up and down the parade line.  She behaved as though she had been in parades all her life, illustrating the calm nature of the Georgian Grande.  When we reached the booth where the horses and riders were being announced, the crowd broke out into applause.  Windzor seemed to strike a pose for them, as though she were saying ?Thank You.? She made a lot of friends that day and many children smile, leaving a lasting hoof print in Lexington.

We came back to Lexington for the IEF in October.  Windzor paid no attention to the traffic whizzing by as we unloaded her from the trailer in the busy city.  She calmly walked to her stall on a narrow path of stall mats and settled in as if it were her stall at home.  In the time before the demo people crowded around Win's stall taking pictures, asking questions about the breed, and getting

plenty of kisses from her. The IEF staff said Win was the most personable horse they had in the festival.  They were amazed at the open personality she had and how good she was when the black powder gun was being shot off. One staff member also said Win was amazing with small children!!

For the demo I mounted Win bareback, while being dressed in classic dressage clinic attire.  We moved about the ring on a loose rein, while I discussed how Win and I became a team.  I also touched upon her various achievements in many different disciplines, relating it back to how versatile the breed is. Then I restated the background on the Georgian Grande and their various abilities.  The crowd had a few questions at the end of my presentation that I joyfully answered. We then went back to our stall and had many wonderful conversations with people from the crowd.

It was an honor representing this wonderful breed in the parade and at the IEF.  There seemed to be a lot of interest in the breed, hopefully we encouraged someone to make their next horse a Georgian Grande.  I would like to say a big thank you to all the helpful staff at the fesival and parade.  They made our presentations run smoothly.  Also a big thank you goes out to Kerry, who allowed us to stay at his beautiful ranch.